September fishing action on Lake Vermilion was best for walleyes, perch and some normally elusive crappies.  First for the crappies.  While they are most often caught in the early part of the season, a couple different cabins happened upon them.  They caught some nice sized ones in 30+ feet of water.  Several other guests caught some smallies remarking on the aggressive fight they offered.  Musky action was limited to seeing several but nothing in the net for the few that chased them.

Lake Vermilion walleye fishing was better than the week prior.  Several cabins had multiple fish frys and others had just average success.  By the looks of the remnants in the fish cleaning shack, some that had success did REALLY well.  We still had guests do well with leeches, but minnows, crawlers and crank-baits were the best overall baits for the walleyes this past week.

After slipping as low as the mid 50’s in some shallow areas during the prior week’s cold, rainy spell, the Lake Vermilion water temp had climbed back up to 63 degrees yesterday.

Some of the fish we heard about include:

What is in store for the rest of September?  Well any of you who called about the last weekend of the season, give us a call.  We had a cancellation this week freeing up one spot for the remainder of this week into this  last weekend.  You can arrive any night between now and Friday night for a 3 night stay.  (4 or less guests).  Beyond that, our only other option would be a 2 night stay beginning on Saturday the 28th.

This is what it looks like in God’s country today.  Plenty of fall colors yet to come.  Shouldn’t you be here? 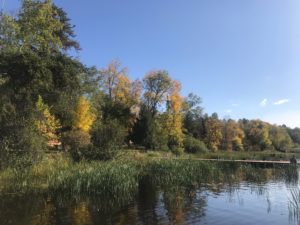 Fall is in the air.