Lake Vermilion fall fishing news included lots of chatter about the weather.  The past week tested everyone’s perseverance.  Although we were happy for the rain, it didn’t come at night like we hoped.  Rain suits were key.  Fortunately for many the bite was decent when they were able to get out.

Doug Vieth and Larry Kopczyk had a nice outing early in their week catching a mix of walleyes and jumbo perch, including the 21 incher shown below.  The Harveys were pleased with a pocket of jumbo perch they happened upon. 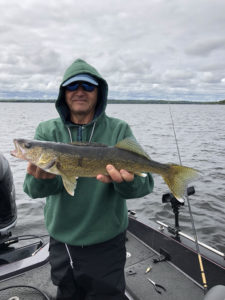 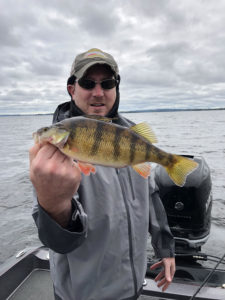 The Rolfsons continued their fish fry routine throughout the week.  They weathered some nasty conditions, but made the best of it and enjoyed several meals like the one shown above.   All in all, walleyes have not been finicky toward bait options.  They have been caught on minnows, crawlers and leeches rigging.  Trolling crank baits has been successful as well.

Jerry Lovell caught a nice mixed bag.  He had 2 largemouth bass over 4 pounds, a nice smallie and this 13 pound northern. 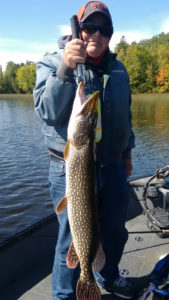 There were a few sub 40 muskies caught and another handful of frustrating follows and misses.  The Lake Vermilion water temp has been fluctuating anywhere between 54 – 58 degrees depending on the spot, but will likely stabilize as the week’s high 70 degree days will halt the water temp drop.  This is one week we aren’t telling guests “you should have been here last week!”  Hope we can sneak out a few times this week to take advantage of the awesome forecast.

This week we have one cabin for 3 nights, Monday thru Wednesday.  Then for the upcoming weekend we have one spot as well.  The week of the 21st we have a couple 4 night stays, and then a couple weekend spots the last weekend of September.  The bite is good and the weather looks like it is going to be decent, so —