The Sun Sets on another great Lake Vermilion season

The sun sets on another great Lake Vermilion season for us at Everett Bay Lodge.  Thanks to Brian Horn for sharing his timely photo!

The last week of the season was a mix of guests taking advantage of the full week on the lake while others slipped away for a long weekend.  Those that spent the week experienced the usual fluctuations of weather with some great days competing with rainy days.  A few groups jumped a little later in the month than their usual annual trip, and found a hard frost one morning and temps colder than they expected.  Still nothing beats those beautiful September days with the deep blue skies, turning leaves and walleyes on the line.   The Lake Vermilion water temp has dropped below 60 degrees again, but it looks like this time it is for good.

Seemed to be a bit of a transition time for those chasing muskies as they were found both deep and shallow, but not very aggressive.  Walleyes were partial to bigger minnows and crawlers, and caught in 20 feet of water or deeper.  In addition to nice jumbo perch and eater walleyes caught for the skillet here or packed for the return trip home, we heard about these fish:

We appreciated the guests that spent just the last few nights of the month with us.  What are the chances that the first guy to check in in May for opener was the last guy to check in for the season?  Better than you’d expect as that is exactly what Lance Lind did.  Here are a few of the fish he told us about:

On another note, what are the chances of seeing a moose on the property?  We get that question a handful of times every season during guest check-in.  Now that answer too is “better than you’d expect.”  While we have seen a moose, sometimes more than one at a time, over the course of our twenty years up here in the area, never here at the resort.  The Lockwoods shared pictures of one they saw swimming in the lake during their early July stay.   Where are my pictures?  While I thought I should be taking a picture, instead I just looked on in disbelief.  It was so loud I turned around to see what the noise was and a pretty good size moose was making its way across the parking lot at a pretty good clip.  It was reassuring later that evening when we were eating dinner at the VC – others had seen it too! 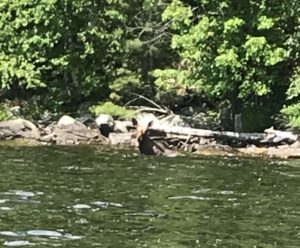 So what’s ahead for things here at the resort?  Rental boats are stored, docks are being pulled, cabins are being closed down and as usual Dave will spend his birthday blowing out the water lines.  We will then shift gears to focus on sorting out final plans for 2020 sport shows and building our TO DO list for next season.  Just booked another spot for August.  If you want “your cabin” during “your week” now is the time to lock it in.