July 4th week at Everett Bay Lodge is in the books!

July 4th week at Everett Bay Lodge is in the books, and we want to thank all those that chose to make our resort their Lake Vermilion home for the holiday week. Many guests took advantage of several of the Tower, MN July 4th events. Yet others focused on their fishing, played golf, enjoyed yard games and took in the beauty of the lake and the wildlife around us. The Lockwoods had a couple neat sightings. From afar they saw the ears of a moose and were able to watch it swim across the bay they were in and eventually head up on shore, looking over its shoulder before disappearing into the woods. They also saw a mama bear and her 2 cubs at the side of the road as they were driving along in their car. Here are a few pictures they shared. 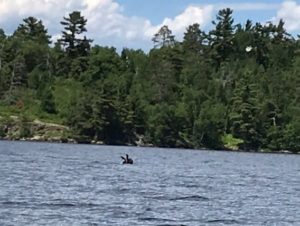 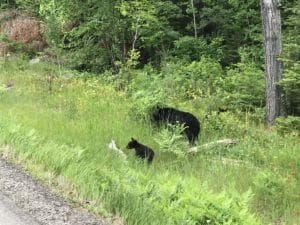 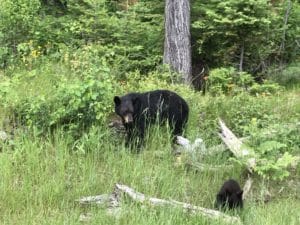 As for the fishing, it seemed the mayfly hatch came into play for some guests, while others had success whether they avoided the active hatch areas or fished in them. Trolling crank baits, rigging with a 1/2 crawler, or a slip bobber and a leech produced walleyes and some nice perch. There were windows of inactivity but fortunately those that stayed at it were rewarded eventually. Carter Niesen caught his first ever walleye – the nice 29″er shown above. Sets a pretty high bar. His crew found a steady supply of good blue-gills, eating fish here a few times and taking an assortment home. Their plans are set for next year with a likely challenge to upset Carters spot on the big fish board.

Muskie action was just fair, although there were some sub 40’s caught, several seen in follow only mode, and a 45″ caught by Nathan Rahman. Dave and Eric hopped out for a short time one afternoon, seeing fish on both spots they hit. There were some smallies and largemouth bass caught as well as several northern pike.

Some of the fish we heard about include:

All in all it was a nice holiday week, affording guests to do as much or as little as they chose.  Thanks to all the local volunteers who worked so hard to coordinate all the events, and thanks to the neighbors up the peninsula who provided a fantastic fireworks display – that was as good as you could hope for!

While we have a spot open for the remainder of this week, the rest of July is completely full except for a 3 night stay in Cabin 3 starting on July 30th.  Fast forwarding to August,  a week long stay in Cabin 7 begins August 10th and we have a partial stay that week as well as the week of the 17th.  There are more options beginning August 24th.  As September arrives, while the first week is limited to just a couple partial week stays, the last several weeks of the month have good options to choose from.  Follow this link to check out your trip dates:  http://availabilityonline.com/availtable.php?un=everettbay